Back in the summer of 2014 Network Rail announced they would be closing the railway line that serves Chorley, were I live for a month and a half while they lowered the track bed through the tunnel underneath the A6 to allow the installation of overhead lines for the Electrification on the line due to be completed in 2016, they would also be putting back the masonry flying arches which supported the walls on the approach to the tunnel from the Preston end which were removed 10 years ago during previous engineering work.

This left me with a problem, the announced replacement coach services and 6 trains a day (3 in morning rush hour and 3 in the evening rush hour) was a significant reduction from the normal services and there would be no guarantees on the times I would get into work.  As part of the replacement timetable announcement was that more services (including the TransPennine Express services) would be stopping at Leyland (located on the West Coast Mainline before the branch which serves Chorley and about 6 miles away from my home) so the logical step was to try and get to Leyland to link up with rail services.  So I thought some more about it and decided this was a good way of kickstarting a new exercise regime, at that point I cycled occasionally at wee ends when I could fit it in.  One major stumbling blocks for going to cycling as a way of part commuting to work is the problems with not enough cycle stowage on trains, severe over crowding and most importantly ignorant commuters.  TransPennine have a standing order of no more than 2 bikes on any train, some conductors who are in the minority actively enforce it, the majority and sympathetic to the fact the trains are badly designed (for bicycle accommodation) and cyclists need to use the trains as much as anyone else.  So in order to get around this, I decided a folding bicycle was the only real  practical way forward here.  If the there were more than 2 bikes on a service then I could fold mine up and a conductor would not legally be able to challenge me and prevent me from boarding the service.

I looked at various options on the market, they seem to fall into 2 distinct categories: small compacts (around 10″ diameter wheels, compact frame which generally has multiple pivot points to enable compact folding); full size folding (full sized wheels – usually around 27″ with quick releases, full sized frame with one or two pivot points, full cassette and dérailleurs).  The Brompton falls into the first category, I’d looked at one a few times, I’m  currently a Consultant at Manchester City Council and as part of their green transport plan their are Bromptons available in the office for business use, so naturally I took one out to see what it was like. 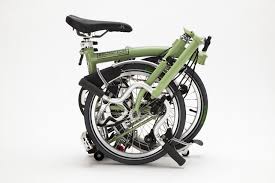 I didn’t test it around were I live I just cycled to and from meetings around the city using it and to be honest it really does work well for urban use.  The main issue that I could see, was the gearing, or lack there of!!! It does have gears, located in the rear wheel hub, so as you can imagine the ratios aren’t brilliant, not like your 11-25s which is your standard road cassette.

To cut a long story short I saw a guy on the train one morning on my commute with a rather unusual looking bike, I could see just by looking at it that it folded.  He told me it was a Montague, it had been designed for US Paratroops to drop with, the model he had was the original Paratroop bike:

It came with a full Shimano gearset which in this case was a mid level MTB system, disc brakes and full front suspension.  He told me they did several different styles of bike, all had the Montague folding system common to them.  I did some more research on various websites, found a commuter style hybrid model, called the Navigator which again came with a Shimano groupset, this one was more road orientated, with a 11-25T cassette and 48, 38, 28 chain rings.  So I looked at were I could get one from, one of the retailers was Evans Cycles and I knew there were branches in Preston (near to where I live) and Manchester (near to where I worked) so I thought “Ideal” so I ordered the bike through their website and selected it to be delivered to the Manchester Deansgate store.  One week later I  got an email telling me the bike had arrived in store and I needed to telephone the store to arrange a time to collect it, when they say it’s arrived in store that is exactly what they mean, it needed to be taken out of the box and built!!  Hence needing to arrange for the bike to be built for!!  I persevered and two days later, after work I went to collect the bike, well that was what I thought anyway!!

Well…The fun really started, anyone who saw my tweets at the time will be well aware of the carnage that ensued, I was set upon by the Evans Cycles staff, one particular person (Lee I think his name was) being particularly vocal in telling me I was wrong and I was making a big mistake.  Actually I think the mistake I made was trying to buy the bike from them in the first place.  After being battered by the staff for close to an hour, including me riding round the block on both bikes as a not very useful test ride (Evans were alittle cheeky at this point as to me it seemed they had over inflated the tyres on the Montague, I think in a vain attempt to swing my views to the Brompton), I stupidly agreed to take a Brompton on a 24Hr Test Ride.  I got the train home having ridden to the Manchester Victoria on the Demonstrator and folded it before boarding, I left the train at Adlington, one stop before my home station.  Adlington is about 4 miles from my home, and I live about 1.5 miles away from Chorley Station, so I thought this would be a fair test for the Brompton.  The route is fairly flat apart from a hill on the outskirts of Chorley that’s about 1 in 5 at it’s steepest, so off I went, to be honest even on the flat I couldn’t find a gear that matched my natural cadence (rate of pedalling) and felt comfortable to pedal in.  I stopped several times to adjust the saddle height, unfortunately I couldn’t get comfortable, so this didn’t bode well for the climb I was about to make.  When I did start to climb I dropped into the lowest gear, it wasn’t even close enough, mid way up my legs were burning and I felt in need of a blood transfusion (sorry, couldn’t resist) I was determined not to put my foot down at any point on the climb, or worse get off and push it, but it I came Bloody close!!  I got home and I knew it was a non starter, this was a more forgiving route than the one I would be doing for my daily commute when the line shut in a months time.

However I decided to attempt that route the following morning, Saturday as I was going to Blackpool Makerspace in the morning and there wasn’t a weekend train service, advanced works in preparation of the tunnel work, so I thought ideal opportunity to test the commute out.  Mark Walton fellow Makerspacer offered me a lift from Preston station, which would be a relief after toiling on the Brompton.  The first 2 miles of the journey went well, then I had to climb over the railway bridge at Buckshaw and I ran into the same problems as the previous night.  By the time I’d climb to the top of Central Avenue in Buckshaw I was all out of energy, I managed to get to Leyland railway station and thankfully there was a coach waiting there (replacement for the rail service!!)  I folded the Brompton up and put it in the luggage space and went and collapsed into a seat.  After the Makerspace meet I got a train direct to Manchester and took the bike back to Evans, thankfully the “pain in the arse” brigade were absent and besides the Tour de France was on the TV distracting the staff anyway.  I gave them a polite no thank you and asked for my deposit back I’d put down against the Montague as well, being worn out by the whole experience I was determined I wasn’t going to put any business their way regardless of my decision.

I did eventually buy the Navigator from a local bike shop called Winstanleys in Wigan, who were alot more helpful!!

So to close this fairly long and rambling blog post on reflection after a years ownership of the Montague Navigator I can honestly say that I wish I’d not been so caught up in the idea that I needed a folding bike, I wish I’d splashed the cash on a bog standard commuter bike, for the same money as I paid for it I could have had a reasonable spec commuter 🙁  The trade off with weight verses durability, especially considering the state of UK roads wasn’t great, 8 months in and with the first half of winter being very wet saw me having to replace the rear wheel after continuous broken spokes.  Admittedly on the first occasion it was caused by an ignorant commuter slamming a fold down seat on top of the wheel, once again cyclists have no rights on trains!!!  But this is a separate issue not for this blog post.  As far as a fold up bike goes, it’s not that brilliant either, it does fold in half, removing the front wheel using the quick release does reduce the size but not enough so’s you’d call it compact.  I purchased the recommended carry bag to put it in, when it eventually arrived 9 months after I purchased the bike it didn’t improve the situation, if I was to board a packed commuter train with this on my shoulder I would be struggling to say the least, this system is meant for putting it in the boot of your car rather than having the inconvenience of having a bike rack fitted to your car not a commuters best friend I’m afraid to say.

Since writing this post I’ve also had to replace the chainset due to the an SPD Pedal coming loose and grinding out the thread on the crank arm, now I’m not going to blame this entirely on poor quality parts, although I’ll be honest I’ve not hear of SR Suntour until I had to find a replacement for it, the SPD was fitted by a bicycle mechanic and he did check the tightness of them before I left the shop, which I witnessed, two days later I ended up kissing the Blacktop while putting some power down climbing a hill!!  The rear cassette and deraillier are from the Shimano Sora Groupset range so rather than replace the chainset with the same again I opted to have a complete Shimano Sora Groupset and bought the equivalent Shimano part.  “Touch Wood” since I haven’t had any further mechanical woes!!